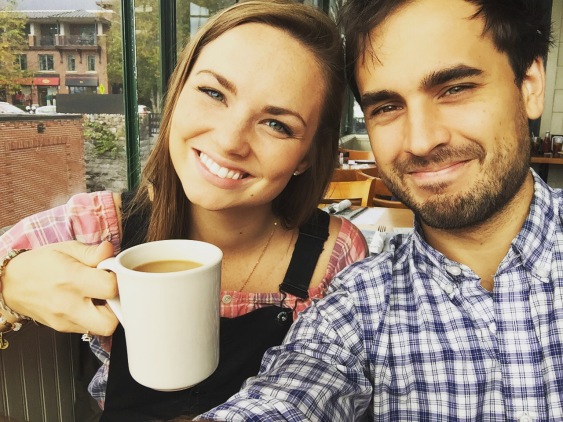 On Friday October 13th, my birthday, my husband agreed to interview me for the blog. He whipped up homemade coconut cinnamon lattes for both of us, and we embarked on a gorgeous walk through Inwood Hill Park all the way to Fort Tryon’s breathtaking overlook. I thought it would be fun to spend my birthday morning reflecting on my first few years in NYC. I’m looking forward to many more in this city that never sleeps!

*Ideal cup of coffee: Very hot with a little bit of coconut or almond milk.

DWT: Helloooooooo and welcome to Actor Meets Coffee! This is a very special interview because well… it’s Annabelle’s birthday and so we are taking a walk and I am going to ask her her own questions! Hash-tag-hubby-take-over… here we go.

DWT: Well- I made you an incredible coconut steamed latte this morning with cinnamon sugar so I think maybe you can just remember your coffee during these questions…

AF: Haha, you’re right… it was a double-shot. Must be why we’re walking so fast.

DWT: Describe yourself in 3 words.

DWT: Tell us a little bit of your back story…where you’re from…

I’m from Wilton, CT…I did all the shows at Wilton High School.

DWT: And you won, Wilton Idol!

AF: When I sang, “Tomorrow” from Annie. That show has just followed me around.

DWT: The kids made you sing it on the playground and you were like, “I think I want to be an actress.” And then you followed your dreams.

AF: Right- and then I went to Belmont University for Musical Theatre…where I met you. And the first show we did together was…Anything Goes.

DWT: And I flirted with you hardcore.

AF: You thought you were flirting but really you were just winking by the wings. And then I moved to NYC in 2015…auditioned a ton, got my card in 2016, signed with CLA, and then landed two lead roles this year! Woo woo!

DWT: What did your first year in New York City look like?

AF: At first… a lot of early mornings to got on that nonequity list…

AF: Ugh..I feel for you guys. I was really lucky because I booked an Off Broadway kids show at Vital Theatre from a video submission during a contract right before moving… so when I arrived I just jumped right in. It was really nice to be a part of a show while I was auditioning because I had somewhere to go and perform on the weekends after a long week of being on the grind!

AF: Then that Summer of 2015 I was part of Spring Awakening at the Hangar. Then I came back and was a part of the Off Broadway premier of the kids show, Flight School. While I was a part of that I was auditioning a lot for Theatreworks and then after about 5 callbacks, booked Junie B. Jones in the Junie Tour. I left the city to tour for 6 months, came back and oh and in that timeline we got engaged and married…so kind of a crazy ride!

DWT: And what were those two Equity contracts you mentioned before…?

AF: I played Magnolia Hawks in Showboat at the Alhambra and then shortly after Kathy Selden in Singin’ in the Rain at Summer Theatre of New Canaan in Connecticut and actually got to live at home in Connecticut with my parents since you were away performing in Nantucket.

DWT: What attracted you to a career in the theatre in the first place?

AF: I’ve always been very dramatic and creative. I loved feeling totally separate from myself but also fully myself at the same time. At age 11, I loved being Annie in Annie probably because I’d always wanted to be an orphan! Haha- when I was five years old my parents walked into my room and found me “counting my money to be an orphan” after not winning an argument…haha. No- but I don’t know…I didn’t know that part of me existed but when I found it on stage in front of everyone it was like, “Oh this is fun!” And I’ve loved that adrenaline rush ever since!

DWT: What/who is your biggest motivator to keep on going in this business? Definitely me, right!?

AF: Yes…definitely you! There have been so many days where I’m like, “I can’t do this…there are thousands of girls that are just like me…” and Douglas is like, “No but you’re special!” and I’m like, “No I’m not!” But then when I channel what is unique about me in the room it’s always a more successful audition because I look at it as a performance opportunity and time to tell a story rather than just checking it off the list.

DWT: What do you think has been your greatest accomplishment to date as an actor?

AF: I think it’s been an accomplishment to have worked consecutively after my Theatreworks tour! For a long time I was placed into a stereotype of young/child roles…and after playing Junie B, I was ready to embrace this “type.” But I think I’ve been successful in breaking through those stereotypes. It was just a few months after tour when I booked Magnolia in Showboat and I was getting to play these ingénue roles. It’s an accomplishment to have reevaluated my type or lack of type!

DWT: What is the hardest and the greatest thing about living in the city?

AF The hardest thing about living in the city is feeling like you have to constantly “go go go” and if you take a moment to breathe you’ll fall behind. But at the end of the day when I realize I’m getting caught up in the chaos of the city I need to sit back and assess how far I’ve come because if I don’t, I get so overwhelmed. The city can be very overwhelming if we don’t give ourselves permission to relax and release. The greatest thing about living in the city is all the opportunity, being close to friends, and to be able to say, “I’m doing it!”- at least for this season of life…!

AF: And when you do have those achievements or those breakthrough auditions… it’s really exciting! Classes pay off, certain relationships that you cultivate could lead you to the next big thing which is really what’s so cool about this city! You could be friends with someone in a show, and turns out they’re also a writer, and they want you to sing one of their songs from their show or be part of a concert for a friend, and you hear those stories about there being casting director in the audience…

DWT: We’ve all heard this story before

AF: And they’re like, “Hey I just heard you sing and I want to cast you in a show!”—Not that this has happened to me yet but I think that’s so exciting and cool and keeps me going. You just never know when it can happen!

DWT: How do you evaluate success?

AF: Success is being happy amidst the chaos.

DWT: I think that’s a good answer! What has been the biggest life lesson you’ve taken away from a contract or a role?

AF: I think with Theatreworks I realized I needed to take better care of myself. I wasn’t eating properly, sleeping enough, or doing the typical physical or vocal warm-ups because our time was so limited…so I learned that with that contract.

DWT: You learned your limits.

AF: Yeah- I also have learned that I can do more than I was capable of! With Showboat I was really scared because I’d never played such a legit role. It’s cool to learn through experience your greatest potential!

DWT: What are your words to live by?

AF: I always say this to other people… everything happens for a reason. Whenever I’m confused about why something went the way it did, I have to remind myself of this.

DWT: I thought your words were, “Love is patient, love is kind!”

AF: No- those were from our vows!! The other one would be Romans 12:2, “Do not be conformed to the patterns of this world but be transformed by the renewing of your mind.” I think this is more important now than ever in our ever-changing world. It’s really easy to want to be like other people if we see them having success. It’s easy to want to emulate somebody and want to be just like them but it’s important to remain true to yourself and at the same time be open to all the opportunities ahead of you.

DWT: What’s the best thing about your husband? Going off the books! This is NOT one of Annabelle’s questions…

AF: The best thing is that he’s equally goofy and serious. So when I need tough love and truth about an audition or situation or scenario he is all truth bombs. And he’s also always performing for me. He keeps me laughing… which is important!

DWT: Where do you see yourself 10 years from now? I’m gonna answer for you…

AF: These are things I think we’ve agreed on…?

DWT: NYC scenario: Ten years from now Annabelle will have five dogs and will be living in a penthouse apartment…central park west at 74th street, one child, you’ll be in a Broadway show… But if we move to Nashville we will be living somewhere in Brentwood or Green Hills and we’ll have a garden and we’ll have several golden retrievers and you will be running some sort of Theatre thing…

DWT: Yep! Definitely. Hey- so thanks for reading this week’s Actor Meets Coffee!

AF: I hope you’ve sipped along and enjoyed your coffee and our chats!

DWT: Cheers to you!